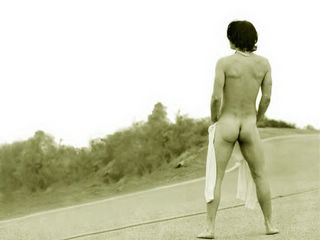 Keanu Reeves never meant anything to me. Sometimes, I’ve had brief flare-ups of Anti-Keanu, which would quickly sputter back down to apathy. Such it was, until:
Something’s Gotta Give.

It was a High Hormonal Alert the minute he appeared on screen, and by the end of his story line, it was – quick, bring the smelling salts – High Matrimonial Alert. Hubba hubba Keanu, and how did this happen? Was it a change in him, or a change in me?

River’s Edge and Bill & Ted’s Excellent Adventure were my intro to Keanu. He played stoner characters not much different than my stoner friends, thus left no impression. After My Own Private Idaho, I didn’t buy into him as a heartthrob (geez, just shower now and again!), and after disastrous accents in Dangerous Liaisons and Bram Stoker’s Dracula, I couldn’t buy him as an actor. I’ve never seen any of his enormously popular action flicks, and would only run into him when he happened to be appearing in a movie I wanted to see (Feeling Minnesota, The Devil’s Advocate).

I never found him conventionally - or unconventionally - attractive, and though he came across as quite the decent fellow and earnest craftsman in interviews, I never understood his vast appeal to the movie masses. Keanu Immune was I, la dee dah…

A high-quality, post-menopausal chick flick featuring Keaton’s 50-something playwright to Keanu’s 30-something doctor. He’s coming straight on for you, but you choose Jack Nicholson?! Informal surveys found women over 45 siding with Keaton’s choice, while us firmly 30-something ladies were still mopping up flop sweat from the sight of Keanu. And I was still shocked to be a part of that group.

Absolutely True Story:
The other night, I dreamed of necking like frantic teenagers with Keanu. The very next morning, a customer adds a pre-viewed DVD copy of Something’s Gotta Give to the purchase. When I commented, “I love that movie,” my 30-something female customer went off on an enthusiastic rant something like this:

I have never been a fan of Keanu Reeves, ever. Never cared for him. I’ve maybe seen 3 of his movie, total. But in this movie? Oh! My! God! He’s so hot! He had me drooling all over myself. And I can’t believe Diane Keaton picked Jack Nicholson over Keanu. And I can’t believe, after all this time, that I now LOVE Keanu!

I squeal, “Sister, you’re tellin’ my story!” and we tried to figure out why this is happening, for it does perplex us so. My final analysis is: Age has finally brought character to a face that was once nearly immobile in its vaguely Asiatic innocence. But even greater is that Keanu finally played a character of his own age, country and time period.

No accents, no centuries past or years in the future. Not an oddball, dummy, victim or man plagued by bombs, diseases and evil enemies. He portrayed a perfectly believable, normal human being, which is a surprising change of pace. Maybe because he wasn’t saddled with the extra pressure of extra business, he didn’t have to concentrate on “acting” and could just be. He had only to portray an idealized version of the real Keanu, and suddenly, the effervescence of his true soul was allowed to shine through!

OK, I spun out for a second. But seriously, when he kept it low key and real, out poured this magnetism so intense that even apathetic non-believers were swimming laps in his dreamy testosterone pool. We’re talking authentic, high-caliber Movie Star wattage here. And during a time when publicists and studios are so desperate for Real Movie Stars that they foist Jude Laws and Collin Farrells upon us, it’s a pleasant surprise to find the Real Thing can come out to play any time he so chooses.

Sometimes, if there isn’t a cut line, I have no clue it’s Sheryl Crow. Sometimes I mistake her for the gal who played Yola, Chris Isaak’s manager on his dearly departed TV series. 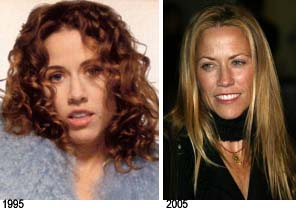 Miss Sheryl excels at many musical things.
She gracefully upholds the finer traditions of classic rock.
She has a pleasant and distinctive singing voice.
She’s a knowledgeable and consistent songwriter.
She understands the importance of a juicy radio single and always delivers jewels.
She is an utterly amazing producer.

This is, obviously, not enough for Sheryl, and that’s fine. In today’s multi-hyphenate entertainment world, it’s a gal’s right to stretch a little. But all of Sheryl’s leaps outside the car that brought her phhhhhwap like a punctured tire.

I’m not even thinking about her acting in The Minus Man (basically playing herself as a junkie), or her scenery-chewing turn in De-Lovely. What I really mean is that Sheryl Crow wants to be A STAR!

No, not a rock star (been there, bored with that). Today, anyone can be that as long as your PR people say so. Miss Crow wants to be A Stahh! As in a cover of any magazine, idol of all demographics, cut my hair like yours, recipes she feeds to her man, when is the doll coming out Mega Celebrity Star Baby.

She’s got all the behaviors down, but just can’t pull them off with the cool coco butter tanning breeze that true superstardom requires. For instance, what the fuck was she doing on the cover of Ladies' Home Journal talking about surviving depression and Owen Wilson? The typical middle-class SUV soccer Mom reader didn’t recognize who it was that broke the heart of “that lady who sings that one song.”

And then there’s the more recent Look At My Boyfriend appearances. Oprah on a Friday, where she sings her love song (and newest release, naturally) to Lance. Then the Grammy’s that Sunday, where she dedicates a god awful dress to him, giggles like a teenager, and makes everyone very uncomfortable. Why does she do these things to herself, and to us?

Sheryl Crow is like the absolutely coolest burnout girl in the high school smoking area deciding to try out for cheerleader while dosing on some powerful microdot. It feels great to her, but we must stop her before she Art Linkletter Daughters off the administration building.
Posted by tobyweiss.com at 7:14 PM 3 comments:

In their daily life, a performer must ply the trade that pays the bills as well as maintain the image they cultivate to keep them working. It’s like having 2 full time jobs, and this is what seems to cause performers’ to be a rather high-strung bunch. It’s seldom the physical act of their work that causes them grief, but rather the Care and Feeding of The Image that depletes their resources.

The Image should be an idealized version of the actual human performer, but many times The Image has scant few things in common with the actual human. The farther apart The Image and The Person are, the more labor (and labor force) is expended, thus cutting into the profit margin. So, performers who have created wholly fictitious versions of themselves– think Tom Cruise or Jennifer Garner – waste valuable creative time and money keeping the doppelganger alive before the media.

This concept of a fabricated image affixed to a most unlikely candidate is certainly not new, and has kept the entertainment magazine industry in business for almost 90 years.

Hollywood Hypocrisy is not only big business, but also a fascinating board game with exacting rules of play. Those who show up for game night with snacks and follow the rules (again, Cruise or Garner) are winners. Lindsay Lohan’s ludicrous explanations and denials are like the brat kicking over the board because she’s losing. Folks like Benecio Del Toro or Jack Nicholson never sit at the gaming table, too busy sneaking smokes in the backyard.

Has she ever denied each new public embarrassment? Hell no.

Has she ever employed damage control over any of these public embarrassments? Hell no.

Has she ever publicly apologized for any of these media crimes? Hell no.

Has she ever pretended to be anything? Hell no.

On this last point, let me clarify: She’s never strived to be anything other than a useless social heiress. It’s that the entertainment media feels a compulsion to turn her into something.

Wanna compile your “thoughts” into a book. What? OK.

Wanna “model” in an ad campaign? Sure, why not?

It’s as if the media desperately needs to create a valid profession for her, so as not to feel so bad about wasting so much space on her. “Seinfeld” was proud of being a show about nothing. If Paris had a single thought, she, too, would be proud of being nothing. Why must the media try to complicate this gal’s life?

There is no celebrity more honest than Paris Hilton.

She possesses rare nobility, the likes of which Celebrity has never encountered.

Does this make her worthwhile? Hell no.

…nobility is just as tiresome as Paris Hilton.

Take a cue from Paris (a woman you claimed to once love so deeply) and basically ignore your leaked sex video. Most of the rest of us have, and it's unwise to make such a ruckus over so very, very, very little, my son.

Speaking of molehills: The girls never sue over leaked sex tapes. The guys always do. Another piece of evidence as to why there's never much male full-frontal nudity in the Men Run movie industry.

I've been recovering from surgery, a totally worthless zombie sleeping in restless 45 minute bursts. That's apparently just enough time to get some REM sleep in.

A reoccurring figure in my dreams is George Clooney. Which is very odd.

While I'm a Celebrity Whore, Clooney has never been on my Main Men List. Not that he's done anything wrong. In actuality, he's about as cool as a star can be without becoming annoying. He comes across as a remarkably intelligent celebrity, probably even an intelligent man, period. He makes only the movies he wants, small box office be damned. PR be damned, he sticks up for what he believes in and speaks out against bullshit. His attractiveness is apparent in that Old-Hollywood way, his sense of humor legendary, his stomach ulcers and drinking problem proves he's just a normal guy with real problems, despite the great life he's made.

I've never seen ER.
Movie-wise, I've seen "Oh Brother...", "Intolerable Cruelty," "One Fine Day," "Ocean's Eleven" and one of THE greatest movies of all time, "Out of Sight."

That's my run down on George Clooney.

Yet he's been an avenging angel and nursemaid in my post-surgery dreams.
If I were up to speed, I'd be all over the analysis. Instead, I'm dependent upon Vicodin every 2 hours, and hoping some day to once again breathe through my nose and stay awake for 8 hours or so.

While I'm physically incapable of bright thoughts, George Clooney is here to see me through this ordeal, to bring me back to the other side. I did not go looking for him. He came to me. Thank you, George.
Posted by tobyweiss.com at 10:14 AM 1 comment: