If you were to find the very cotton-candy center of my unblemished, romantic heart, you’d see this: 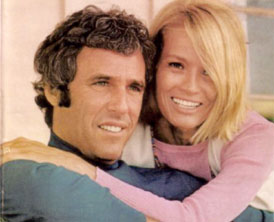 I vividly remember the first time I heard Dionne Warwick singing Bacharach & David’s “Do You Know the Way To San Jose.” Oh, enchantment! My little tyke self instinctively understood what was spelled out in those rhythms, that glide, that smooth. I conjured images of cars gliding down LA freeways, a butterscotch lollipop against an azure sky, gas stations where stars pumped gas with white plastic sunglasses pushed atop blonde hair glowing in the sun…

I bought into the California way of life without even knowing they were selling.

At that tender age, I also bought into the entire catalog of the Bacharach way of life. I knew nothing of lifestyle choices of the modern era, of suburban cocktail parties in green and aqua rumpus rooms. I understood nothing of Bacharach’s musical blending of jazz, classical, pop and rock, or Hal David’s seemingly light yet incisive lyrics, the two men a modern-day George & Ira Gershwin. I hadn’t even equated that all the songs that stirred the very core of my tiny tot being came from the same men, or that their vision was perfectly expressed through the voice of one or two women.

I only knew that certain songs transformed the very moment within which I heard them. I could be absorbed in a coloring book when suddenly:
…bohm, bohm, bohm, bohm (kick and snare)
“Oh, L.A. is a great big freeway
Put a hundred down and buy a car”

I was transported into a new world of die-cast precision scenes that came not from any personal experience, but from tuning into the frequency created by Bacharach & David. Their wave-length could physically spin me like a top as horns and strings pounded madly at the end of “Promises, Promises” or skip me lazily through a gentle downpour of “Raindrops Keep Falling’ On My Head.” A sorrowful, insistent piano riff stopped my breath as a bank of ladies in sequined gowns chanted “Don’t stop/ Don’t stop” as a Garland-esque glamour girl wobbled past wailing:
“So walk on by
Make believe you never see the tears I cry.”

From Bacharach & David, I developed distinct notions that kissing boys gave one pneumonia, that the Lord would give us no more meadows until we got more of the love we needed, and that a lad named Alfie had all the answers but refused to spill the beans.
I was perfectly content with this world view. 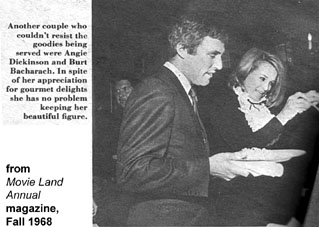 A little time passes, a grade-schooler distracted from homework by a TV commercial… Burt Bacharach at the piano with Angie Dickinson practically in his lap, frisky from both the vermouth and how utterly amazing they are. From that moment on, my ideal of love was based on the rosy glow surrounding Burt & Angie as they billed and cooed:
“Martini & Rossi on the rocks
Say yessss.”

Rather than sitting in our tiny little apartment in my polyester PJs, I wanted to be on the set with Burt & Angie, sitting on the hearth of that roaring fire, humming to the vibration that perfect love emits. My parents had just divorced, but Burt & Angie were together, perfect and gorgeous, the look of love was in their eyes.

I wasn’t yet sure what sex was, but I knew that “sexy” was Burt & Angie lounging by their Beverly Hills pool. I wanted a house near theirs, so they’d be my neighbors and come hang by my pool. In the afternoon sun, a massive stone BBQ pit smokes while a purring blender makes us frothy pink drinks with aqua paper umbrellas jutting out of the foamy crest. We all laugh as Burt tosses the tiny umbrella into my deep end…
”Together forever
That’s how it must be
To live without you
Would only be heartbreak for me.”

Being a musical genius married to a TV policewoman eventually spelled disaster for Burt & Angie, because by late 1978 they were separated and divorced by 1980. One can’t help but notice that Bacharach’s 15+ years musical winning streak also came to an end around this time. The spell had been broken and I lost my symbol of Ideal Love at that very moment when Kid Crushes grew into Going Out, a cut-rate Angie auditioning a row of Bacharach-less.

To my mind and soul, any Bacharach & David tune equals the sound of love. Unrequited or passionate, serious or casual, brand new or faded, they have a song for and about it. For every Burt there is an Angie, and then there isn’t…
“and so for at least
Until tomorrow
I’ll never fall in love again.”

Posted by tobyweiss.com at 4:24 PM

enjoyed reading the coments about Burt and Hals music and lyrics. They had a tremendous impact on people and still do. Thanks.Brett

Wow, you are more the romantic than I and that is saying a lot. Plus you have a great writing style, able to articulate so well and I thank you for that. Beautifully written...raising a glass of Martini and Rossi to you. Hope we meet at a concert someday.
Alvina

This relates somewhat to your story.. I was mabe 12-13 when 'Police Woman'was in full swing tuesday or wednsdays on nNBC @ 10pm. I was so enchanted with Angie that I would open my apartment door during the opening credits blasting the Mortons- Stevens theme song so 'everybody' could share in the coolness!!!well I'm 43 now and still love her, thanks for listining.

does anyone know if burt and angie had a son together? was his name ebon?

If I had one wish about the entertainment industry then it would be to remove the romantic idolatry and recognize there is genius talent everywhere around you and in every industry and in every skill and in every job. There is nothing special about them other than they are very talented if not uniquely talented in one specific area of their life. They are not perfect and someone can be very average and ordinary while being very flawed...many times people who are very beautiful, very handsome, very talented, very skilled become dependent on that one area of their life and they become very flawed in all the other areas of their life they have ignored. I cannot begin to imagine the pain Burt and Angie felt having a disabled daughter who ultimately took their life. Its ironic how a man who could write some of the most heart felt songs could be so dismissive of real life people and their feelings and their pain. Christy Brinkley said something similar that her husband Billy Joel was far better at putting his emotions into a song than he was sharing his emotions with her or other people. Many people like Jane Fonda's acting but despise her sedition and treasonous politics. They would be better and the public would be better off if we simply enjoyed and appreciated the fruits of their talent and stopped projecting their great talent is spread like peanut butter across every part of their life...like they are some super human. They are closer to idiot savants their super humans. FYI: Idiot Savants are people who are idiots in all areas of their life except for one areas where they demonstrate near genius level talent. Yes it would wipe away the gloss that the industry spent over a century creating but take this into consideration that in the early days the greatest stars didnt act like stars. They went to work in a studio system. They ate in a canteen and worked late hours. Many brought lunch pails with sandwiches and coffee. They were real people not born into the industry, not born into wealth and privilege...they were real people and we loved them more when we found out they were just like us than we did when they wore their elitist tuxes and million dollar gowns.