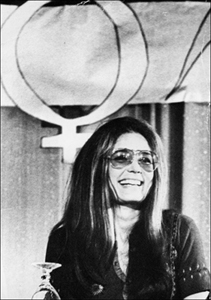 James Wolcott writes about the comeback of the war between the sexes in the June ’05 issue of Vanity Fair, and Chris Nolan’s blog masterfully continues the conversation about women and the media, even – I choose to believe – convincing VF to finally make the article available online.

I tend to agree with most every point Nolan makes on whatever daily topic she discusses, yet I’m haunted by a quote from Harvard government professor Harvey Mansfield that Wolcott uses in his article:

“Feminists do not like to argue, and they consider you a case if you do not immediately agree with them. ‘Raising consciousness’ is their way of getting you to fall in with their plans, and ‘tsk tsk’ is the only signal you should need and will get. Anyone who requires evidence and argument is already an enemy because he is considering a possibility hurtful to women.”

I’m hyper-aware of what both sides say and think about each other, as well the differences within my gender. For instance, I’m the “bad at math” girl stereotype who recently dined peacefully with a degreed lady mathematician. I find great truths and myths on both sides of the gender divide and finding that perfectly natural, I call myself a Post-Feminist Sexist. Because of the brave women before me, I’ve never experienced true oppression due to gender, thus I’m accepting and content with men and women being utterly different from one another while also being whatever they wish to be.

A pithier way to describe Post-Feminist Sexism: I’m fortunate to live in an era where I can buy a house as a single woman, and come moving day, you can be damn sure I’m not lifting any sofas because there’s plenty of men around willing to do my heavy lifting in exchange for drinks and a meal. If everyone plays to his or her strengths, everything naturally equals out.

Before the heat of Feminist ire scorches me, let my background explain this attitude.
My 70-year old mother, Barb, was self-sufficient from the time she dropped out of school at 15 to work full-time. From 1950 – 1965, she lived on her own terms, completely disregarding the rigid rules her female peers lived by. She didn’t marry until the age of 30, and only then because she was pregnant with me.

Miss Barb became Mrs. Barb, complete with a traditional husband who wanted her to quit work and stay home with the child. She gave in to joint checking accounts and credit cards, but didn’t see the logic of being a housewife. She admits that her inbred independence eventually caused my father to stray towards a more dependent woman. 7 years later, Barb was a divorced single mother in the time before rampant divorce infected the Midwest suburbs. It was all very “Harper Valley PTA.”

Trying to reclaim her solo checking accounts and credit cards was the cruelest blow. Even though she had established excellent credit during her single years, becoming a wife completely erased that. Now that she wasn’t a wife, she was an untested, unwanted entity; financial institutions punished her for being a divorcee, which added anger to the pain, and she had no choice but to fight for her financial rights.

When discussing these events with her, I made the comment that she was a “Women’s Libber” without even knowing it, a stealthy Feminist working quietly behind the scenes. She reacted with disgruntled shock. It became clear that she’s never defined herself by her gender, just simply did what she had to do to make a worthwhile life for herself and her daughter. Her consistent lifelong actions were more powerful to me than any Feminist political dogma.

Barb raised me to be completely self-sufficient (by 2nd grade, I was one of the first Latchkey Kids). Instead of softball games after school, it was household chores to earn allowance money, and a continual narration about budgets and bills and checkbooks. Instead of being bred to become a wife and mother, I was raised to pursue all curiosities in order to become whatever I wanted to be. With pluck and enthusiasm, I’ve done anything I’ve ever wanted. My gender has never been a negative issue, and often worked for me in treading paths populated solely by men.

No matter the debates, sexism will always exist because men and women are biologically different, and nothing changes that. What Gloria Steinem & Co. successfully fought for was gender equality as law. With that in place, women can be whatever they want to be. I feel alienated amongst a group of women excitedly discussing nothing but shopping and cosmetics, but pox on me for judging them, especially when one of them is VP of an investment firm. And I’m grateful to live in a time where these juxtapositions can naturally exist.

While I too wonder when there will be more of a female op-ed voice, I also note that few wonder why there aren’t more women auto mechanics and plumbers. As a Post-Feminist Sexist, I know that most women are genetically opposed to being inside the bowels of dirty machinery. There’s no shame, it’s just the way it is. The mother of the 6th grade girl allowed to dress like a Prostitot is a Post-Feminist Sexist, as is the owner of a small restaurant that only employs the female members of her family. You’re just as free to have an opinion about it as they are free to do so, that’s a beautiful thing, and thanks be to Gloria (step-mom to Christian Bale!).

One last thought: Chris Nolan indicates that her written voice is sometimes assumed male. I get that all the time, but with the added bonus of people assuming I’m a gay male. I’m secure in my person, and considering some of the quick assumptions I make (like thinking Macy Gray is covering Billie Holiday when it’s actually the latest Rod Stewart single), I just have to chuckle. Since they keep reading, I consider it a subtle form of compliment, or like a transposed Libby Gelman-Waxner, getting more bang for the Post-Feminist Sexist buck.

post pics of your tits or quit wasting Internet space

"I know that most women are genetically opposed to being inside the bowels of dirty machinery."

genetically? I think not.
there are plenty of "tomboys" and girl gearheads to disprove that notion.